You’ve heard the story a million times about the idiot hikers who go against the grain and abandon all reason. This is my story about two Americans and a Canadian, who got lost in the middle of a jungle. Yes, this already sounds like a punch line to a horrible joke but this was my recent reality two days ago.

It all starts with a brilliant idea to go for a sunset jungle hike in Doi Suthep National Park in Chiang Mai, Thailand. My two friends only arrived a couple of day’s prior, and we wanted to explore all of the great nature that this outdoorsy town has to offer.

I just rented a 2015 fire engine red Fira motorbike that morning and, having never actually driven one myself, I asked my experienced travel blogger friend (www.skyetravels.com), Skye, to take charge. The three of us piggyback onto my scooter holding on for our dear life as we drove up the canyon to a little village, the farthest point we could go before we had to get taken to the next highest point by a songthaew that can be best described as a hybrid tuk-tuk truck.

Our first sign of warning should have been one of the songthaew drivers who, in his very animated attempt to speak Thai-English, tried to tell us it was a bad idea. He waved both of his hands simultaneously from side to side saying “No, no, no!” Then followed up with him running in place wiping the sweat from his forehead. It pretty much looked like he said we were about to walk ourselves into death.

We convinced him anyway to drive us about 6 km up the road for 50 baht (approximately $1.50 USD) per person. We even recruited a solo Malaysian traveler to help reduce our cost. 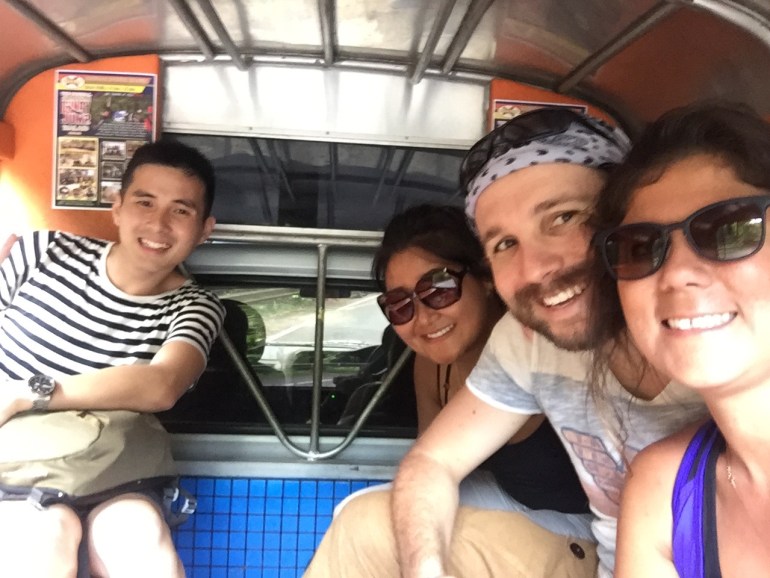 Our driver kept insisting on giving us a ride to the very last point, but we needed to burn off some late night calories from the night before that we asked him to drop us off at one point of the trail where we found a small temple ruin just beyond the Doi Pui View Point.

It was nearly 3:00 pm at this point and I still never really understood how many kilometers the entire hike was. I just figured we’d see signs along the way and figure it out from there.

About 30-45 minutes into the hike we pass a campground where we saw a sign saying it was 4 km before the next village. I facetiously say, “At least we have a place to sleep if we don’t make it back out in time!” This is our last point for restrooms before be begin our 15 km hike. 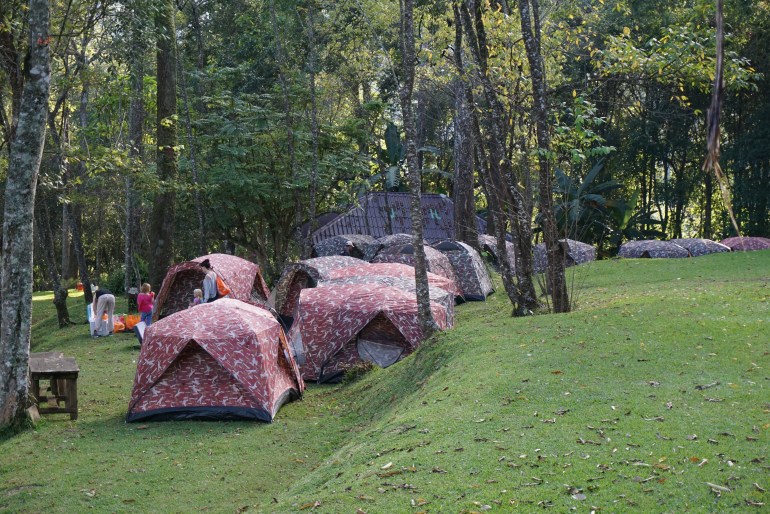 Our Malaysian friend had to turn around at this point because he had been bitten by a dog the day prior and needed to get his second rabies shot. Either that or he had a feeling we were headed into a path of doom.

As we’re leaving the campground, I keep doing the math in my head. It’s nearly 3:30 pm and we still have a lot of terrains to cover. I ignore all reason, stay quiet, and convince myself it’ll be an adventure either way. We can always turn back around at the village if it didn’t work out. Ironically, later, I found out that I wasn’t the only one who had that same thought. 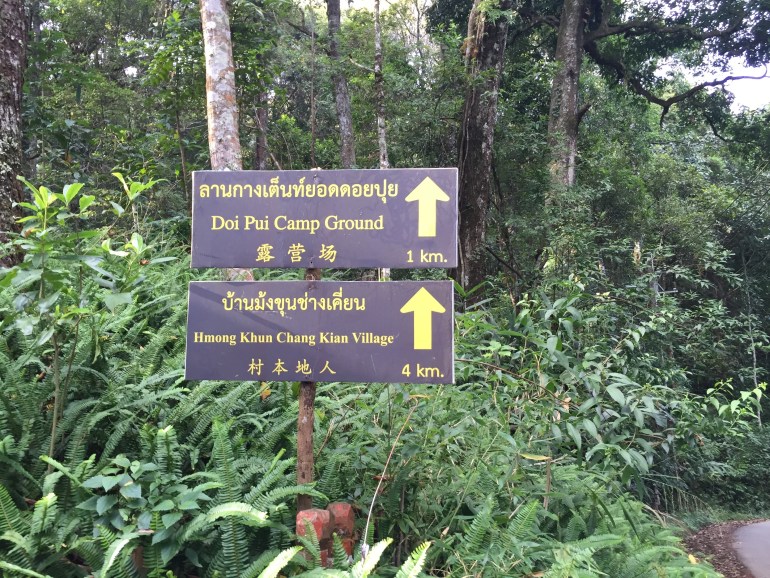 We continue onto our trail and pass a few local hikers who looked like they were on their way back. When we asked how far the trek was ahead and they said we likely wouldn’t make it in time and wouldn’t recommend it.

There goes another sign. Again, all of the signs were leading up to our idiocy.

Not long after we pass them a family in a white pickup truck pull over and offer us a ride. We gladly accepted a ride hopping in the back of their trunk bed with their son (who looked maybe under ten years old) into the nearest village shaving about another 4 km of time to our sunset hike.

Once we get into the village, also known for their coffee, we are the only foreigners around. We see little shops of handmade goodies by the local tribe women. You could hear a medium sized group of children on the opposite side of the road laughing and playing. We see them chasing each other in the distance back and forth on their bikes in tandem with roosters trying to steer clear of their direction. Some of the boys used sticks for toys when they were on foot and their life seemed simply joyful by my standards. It was pretty refreshing to see a culture not self reliant by their iPads, iPhones, or iWants. 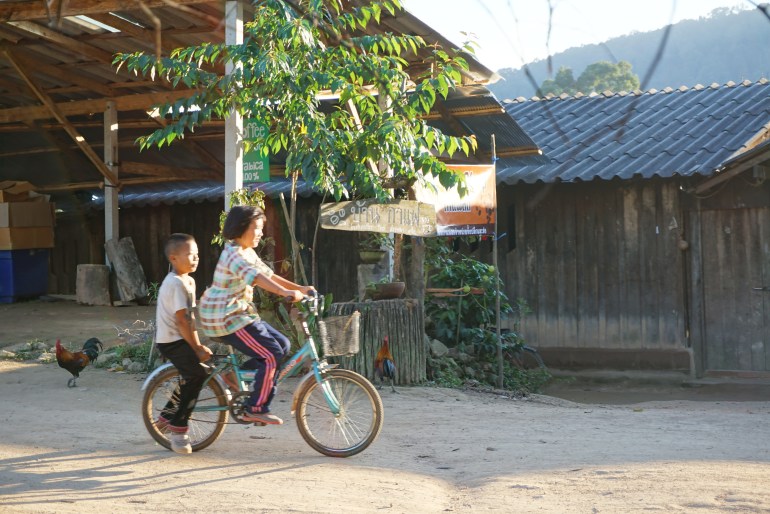 We spend another 40 minutes in the local village and come to a group decision that we’re not going to turn around and instead continue with our hike.

A woman dressed up in local tribe attire offered to give us directions to the trail that led to Doi Suthep temple. She points at an unidentifiable dirt trail behind a shack, and we decided to head on our way at about 5 pm. 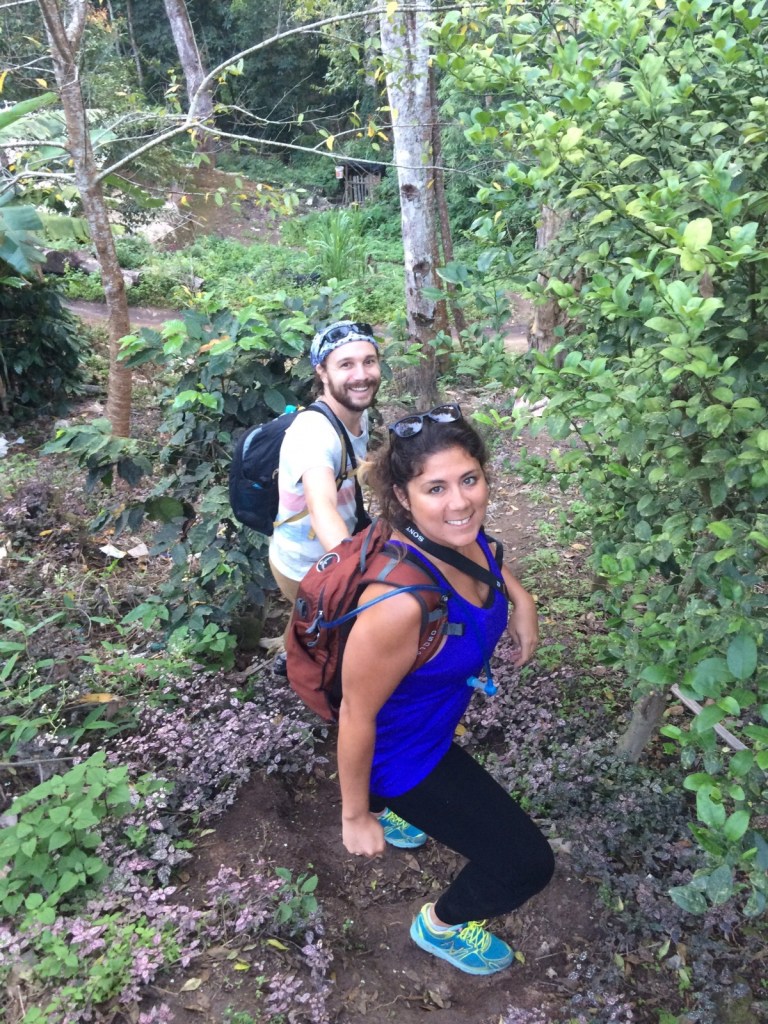 The hike led us by orange markers tied to trees, but after about an hour and a half, we lost our trail. We still had faith we’d find another marker and decided to keep going until a few meters were now coming to a close kilometer.

The delicately rosy sky began to set ardently over the jungle, and we’re reminded why we decided to keep moving past the last village. There hasn’t been a person in sight for miles except for the few rice farmers we passed along the way.

It’s only minutes before dusk and the trail came to a complete halt. There was no longer a pathway and we’re at least an hour away from the village at this point. We decide to walk off-trail up the mountain seeing if we’d find something that connected back to the trail but as it got darker we began to feel a sense of frustration. It essentially led to another dead end.

We decide the only thing we could do is backtrack, but it was very difficult to do so when you don’t know your way around the jungle and the orange markers are almost impossible to find. The now cauldron-black sky led us with no choice but to use our iPhone flashlights and questionably reliable Google Maps.

Nearly 4 hours without a person in sight as we trailed through dead ends, different paths that led to even more dead ends, and all while Google Maps kept pin balling us through the center of this National Park.

We talked about anything to distract us from any weird crackles we heard in the distance and the buzzing insects flying around at night. We even began a game of dare to keep our minds from feeling like we were lost, but that quickly ended when I dared Skye to do a 3-time cartwheel and he almost ate it. At this point we all wanted our limbs to be working together so we didn’t have to haul around any extra weight.

My Canadian friend’s legs were getting desperately tired taking many breaks along the way. We did everything to remain as a team in a moment of high stress and had a discussion about at what point we think she should call for a search and rescue team.

Finally just after 9 pm, and literally on the very last trail we had faith in, we see a light up in the distance. I’m not optimistic at this point because we saw many lights in the distance that led us back into the black night. It wasn’t until we began seeing more signs of civilization like a motorbike followed by (insert celebratory music here) an orange marker!

I’m running as fast as I can to the top of the mountain (in my mind) while my legs moved as slow as molasses. It’s true! We see a light to a home! Skye runs with speedy conviction to let them know we’re here.

At this point, I have a mixed range of emotions. In the back of my mind I’m hoping this isn’t the home of some serial killer because the profile would fit perfect all alone in the middle of the woods. While the other part of me was hoping I’d have this inspiring story to share about how some local villagers generously welcomed us with open arms into their homes with a hot meal and a night exchanging knowledge about our culture.

Instead, we were greeted by a farmer and his albino wife who offered us a place to sit and a ride back 8 kilometers to the village for 800 baht (about $25 USD). We gladly accept and see this as our contribution to feeding them for a month. They warm up the truck and take us to where my 2015 fire engine red Fira parked all lonesome in the desolate parking lot. We gave the couple American and Canadian hugs for not chopping us up and taking us back to our vehicle. What a relief!

Yes, we can now say escaped the idiot hiker story not having any newspaper coverage about us the following morning, but don’t do what we did. Know your trails, go with your instincts, let people know where you’re headed, and don’t hike on trails in third-world countries you’ve never been in without a supervised guide. Then again, where’s the adventure in that? 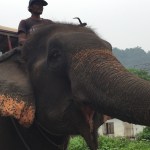 My Moral Dilemma About Riding Elephants 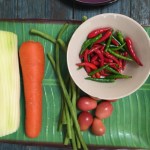 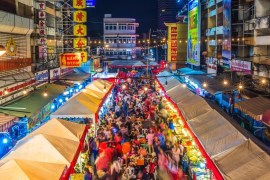 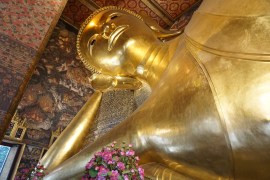 Pre-planning Your Trip to Bangkok! 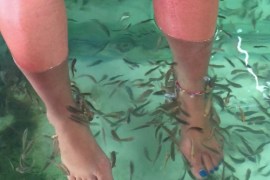